Due to foot problems and possible amputation, the diabetic's foot requires considerably more attention and care associated with good footwear. The heart and feet are the two most stressed and neglected organs. Up to 80% of diabetes mellitus disease depends on the patient's lifestyle, not on the medication.

Diabetologists strive for the maximum possible movement and fitness of the patient, which is impossible without walking.

At the beginning of the development of footwear suitable for diabetics a decade ago, diabetologists repeatedly treated patients with damaged feet with inappropriate footwear.

Diabetologists were at the forefront of developing a shoe suitable for diabetics a decade ago. In the past, they used to repeatedly treat patients with damaged feet with inappropriate footwear.

For severe cases, the technology of making shoes according to the exact impression of the foot in a plaster cast was first developed but has not been widely applied. This was also because the diabetic's foot changes during the day, and swells and it is impossible to determine the time when the footprint should be taken, the production was a small batch, technically and financially demanding for both the manufacturer and the patient. In addition, such individual shoes do not solve a fundamental problem, namely the prevention of diabetics who do not yet have obvious problems with their feet, but who, in time, will develop them by wearing inappropriate footwear. 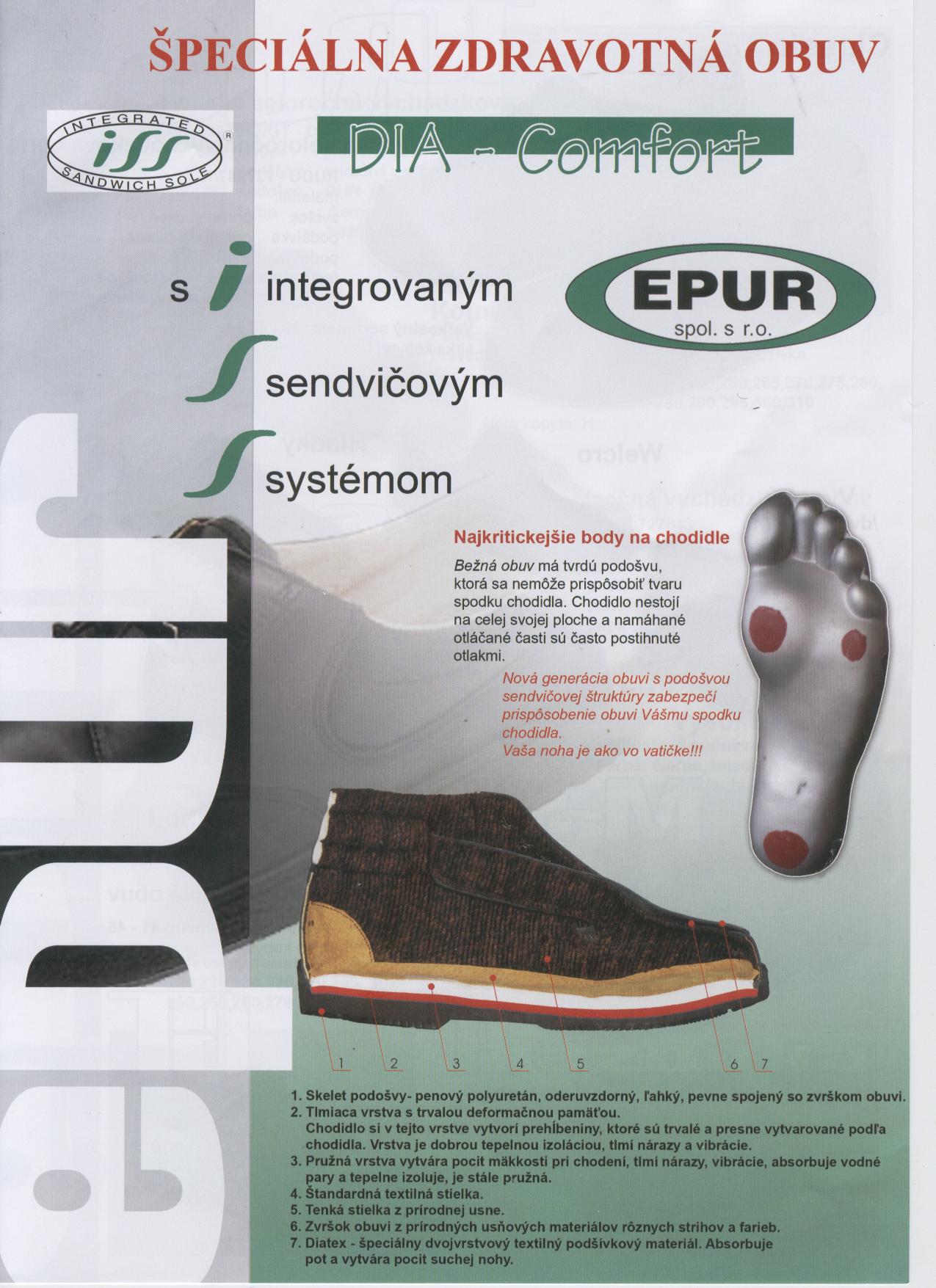 Gradually, shoes were developed with the patented EPUR ISS -DIA sandwich sole structure, where two soft layers are integrated over the entire sole area. In the durable polyurethane skeleton of the sole, there is a 5 mm thick soft EVA copolymer layer characterized by permanent deformation. In this layer, the foot shapes its profile. In addition, to increase comfort, above this layer is an 8 mm thick permanently elastic, whipped latex, which creates a pleasant feeling of softness when wearing the shoe. In practice, this means that the foot stays in place inside this footwear over time, and transfers the weight of the whole body over a much larger area than when wearing standard shoes, and without inserting and replacing various insoles that will eventually become worn out anyway. As a result, localised pressure on the bottom of the foot is reduced or even eliminated, combined with shock and vibration absorption when walking.

It is thus a completely new generation of footwear compared to conventional footwear with hard insoles and soles. The EPUR ISS-Dia footwear is also equipped with a special Diatex lining developed for dry diabetic feet, maintaining a suitable microclimate inside the footwear.

The number of internal seams in the shoe is minimized, and the shoe is bandaged and constructed so that pebbles do not enter the shoe when walking. In the production of footwear, only natural leather uppers and lining materials are used, which, in addition to a pleasant wearing sensation, are also characterized by excellent physical-mechanical parameters and health safety.

In conjunction with the sandwich sole structure, this results in a balanced shoe with a long life period.

Another important factor is the flexibility and lightness of the sole, thanks to the materials and construction used, the pair of shoes weighs less than 700 grams.

In the clinical trials that the footwear of this construction has undergone, its suitability for patients with orthopaedic diagnoses has also been demonstrated. The shoe effectively absorbs shocks and thus spares the joints and spine.

In conclusion, in the development of preventive and therapeutic footwear for people with the most damaged or compromised feet - diabetics - comfortable footwear has been developed and is beginning to be produced for all those who want to walk healthily and comfortably.